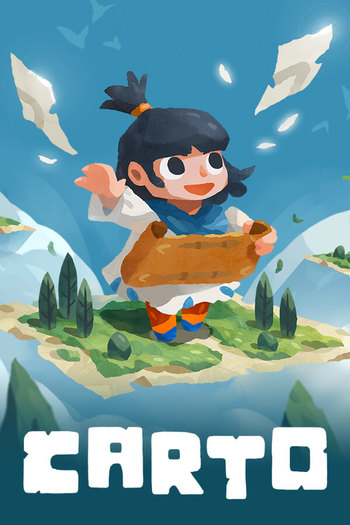 The people of this land are kind (kind of odd, hah!), and I know we'll find our way back to each other soon - it's in our blood. You're far from my body, but you'll never be far from my heart.
— The first letter from Carto's Granny
Advertisement:

Carto is a Puzzle Game by Sunhead Games, available for Windows, Mac, PS4, Xbox One, and Nintendo Switch. Carto is a young girl who is flying along with her grandmother in an airship as her grandmother demonstrates the ability of cartographers to move map tiles around. Carto decides to play with the tiles while her grandmother sleeps, and causes the airship to run into a storm, knocking her out of it.

She wakes up on a small island, where she finds that the map that fell with her lets her use the cartographer's ability to move map tiles around as desired as long as the edges line up properly. On the island, she finds the residents preparing for the coming-of-age ceremony of a fifteen-year-old girl named Shianan, where she will board a boat and sail off to find a new island to live on, never to return home. After helping get everything set up for it, Carto joins Shianan on her voyage as the first step toward finding her way back to her grandmother.

Tropes found in Carto include: