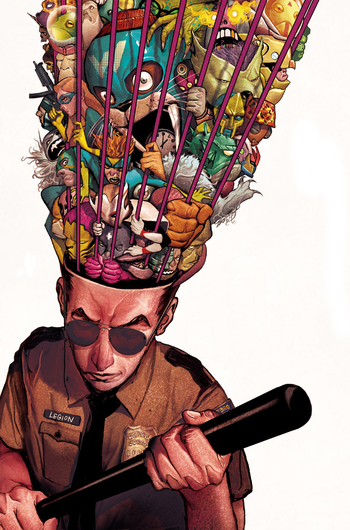 Shepard: What is the individual in front of me called?
Legion: There is no "individual". We are geth. There are currently 1,183 programs active within this platform.
— Mass Effect 2
Advertisement:

As a Hive Mind is one mind, many bodies, a Mind Hive is the opposite - many minds, one body.

The minds/consciousnesses/souls/whatnot of different people are housed within one body, most likely through magical or technological means. The minds can communicate with each other, and normally actions are through consensus.

Distinct from Split Personality because even if what's housed inside is totally separate entities that got merged, they still retain their individuality. Sometimes may speak in I Am Legion pattern. Compare Many Spirits Inside of One. Contrast Merger of Souls. See also Animal Eye Spies.

Example of:
Grand Theft Me

Alternative Title(s): Many Minds One Body