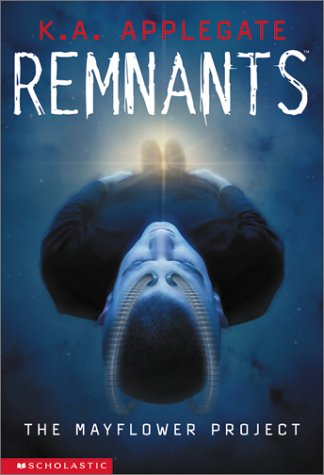 The end of the world has come... and gone.
Advertisement:

Written by K. A. Applegate and Michael Grant (the co-authors of Animorphs and Everworld), Remnants is a 14-book middle grade series published in the early 2000s. The series begins with a giant asteroid called "The Rock"note Not that one. striking Earth, obliterating the planet and all life on it. A last, desperate gambit by humanity is enacted, the Mayflower, a space shuttle rapidly retrofitted with experimental technology, including hibernation berths. Eighty people are shot off into space for the distant hope that someday, they can awaken and find a new planet to refound human civilization on. When they're plucked from space by a sentient super-ship called "Mother", and come into contact with the aliens that call her home, the series proper begins. No one gets out without sacrificing their body or sanity in some manner.

The series is roughly divided into two arcs, though it is a continuous narrative. The first seven books deal with the group attempting to take control of Mother, while the second batch of seven deals with their returns to the broken ruins of Earth. Along the way they deal with internal power struggles, mutations, war, violence, trauma, and Mind Rape. Additionally, as Mo'Steel says, the kids from Lord of the Flies have nothing on this group. Everyone has secrets, personality flaws, hidden agendas, and some are just plain crazy, and despite the fact the group dwindles daily, there's still plays for power and control being made.

Remnants is a dark series, with violent deaths in nearly every book. Aside from the art history and group politics, this is what happens when you combine a large cast with Anyone Can Die. The author promised that Jobs and Mo'Steel would survive; anyone else is fair game. And yes, believe it or not, this is a kids series. That does not stop it from being one of the darkest things ever written.

The series consists of fourteen books:

In 2021, KA Applegate and Michael Grant confirmed the rights to the series were given back to them, and the series was rereleased in Spring 2022

See also the Gone series by Michael Grant, which serves as a Spiritual Successor of sorts to Remnants, as it's about kids with freaky mutations that are distrusted by regular humans, all of whom deal with the politics of their surviving group.