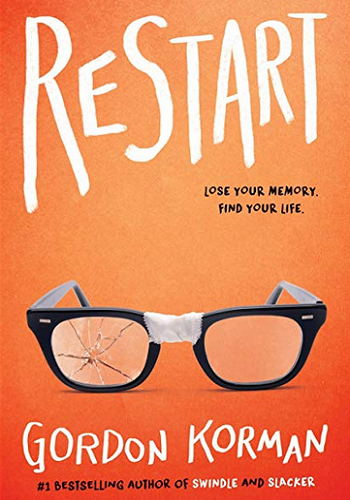 Restart is a 2017 juvenile novel by Gordon Korman.
Advertisement:

Chase Ambrose falls off of a roof and wakes up in the hospital with amnesia. He soon learns that he is a middle schooler and a star athlete. He then slowly finds out more things about who he used to be. The chapters from Chase's point of view are interleaved with chapters narrated by other characters, including Shoshanna Weber, who remembers exactly who Chase used to be and doesn't like him at all after what Chase did to her twin brother, Bear and Aaron, Chase's best friends who want the Chase they knew back, and Brendan Espinoza, who is one of the first people to realize that Chase might not be who he used to be. Soon it no longer becomes a question of who Chase used to be but about who Chase is going to be.

No relation with the Brazilian band from 2000s.