Literature / The One and Only Bob 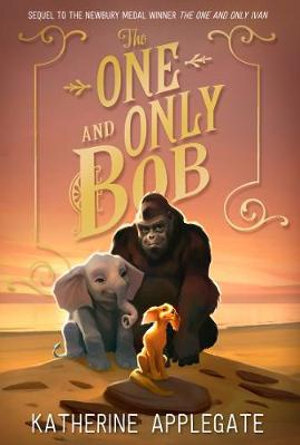 The One And Only Bob is a Novel by K. A. Applegate, and the sequel to The One and Only Ivan.

Much has changed since the Exit 8 Big Top Mall and Video Arcade closed down. Ivan and Ruby are in Wildworld Zoological Park and Sanctuary, where they're looked after by caring people, and around others of their own species. And as for Bob, he's found himself a new home with Julia and her parents, George and Sara. He finds it to be a comfortable existence. Three square meals, belly rubs on demand, all that stuff. It would be perfect if not for the neighbourhood poodle, Snickers, and Nutwit, the squirrel living in his family's tree.

One day, Julia and her family, along with Bob, head to the sanctuary to see Ivan and Ruby. Bob manages to get in some chat time with them, but unfortunately, something terrible happens.

Hurricane Gus was scheduled to be moving through the area for some time now. And while Julia, Bob, and their family are in the park, it decides to hit, sending Bob flying across the park into the giraffe exhibit, causing multiple animals to be released, and causing mass chaos. Now, Bob needs to survive the storm, and in the process, meet up with someone he never expected, but always hoped, to see again.

The One And Only Bob contains examples of: