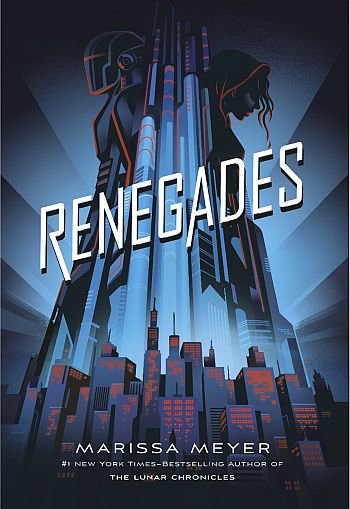 We were all villains in the beginning.
Advertisement:

Renegades is a trilogy of superhero novels by Marissa Meyer, composed of Renegades, Archenemies and Supernova.

Once, prodigies were feared and despised. Children born with unusual powers were shunned at best, and killed at worst... Until Ace Anarchy came. The most powerful prodigy of all time, he overthrew the government and plunged Gatlon City into chaos of a superpowered gang war. But as people cowered in their homes, fearful and powerless, hope arrived in form of the Renegades - the first superheroes.

Now, ten years later, Ace Anarchy lays dead, and the Renegades rule over the city, struggling to rebuild society and government. There are parades in their honour, public trials to join them, and tourists travelling to the city just to see them. But not everyone is a fan. Far beneath Gatlon, Ace's remaining Anarchists, among them his niece Nova, strive to keep his vision of the world alive. And with the upcoming trials, Nova - known to the world as the elusive villain Nightmare - might just get her wish... and, just perhaps, regret it.