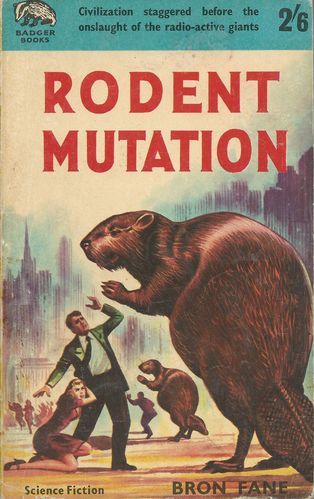 Cower before the staggering might of the beaver apocalypse!
Rodent Mutation is a 1961 Science Fiction novel churned out by Lionel Fanthorpe for Badger Books under the pseudonym Bron Fane (an anagram for "Boner Fan," although this was likely completely unintentional on Mr. Fanthorpe's part).
Advertisement:

Barney Colrayn is a sanitation inspector in East Anglia with the thankless job of ensuring that big companies adhere to laws against illegally dumping toxic waste into the environment. He takes his job very seriously, and is unforgiving in his leveling of fines and punishments against companies that break the law. Consequently, he isn't very popular with the people he inspects (think Donald Sutherland's character in Invasion of the Body Snatchers).

One company on Colrayn's inspection route in particular is a frequent offender. Jasper Leroy Inc. and its eponymous owner really, really don't like obeying the law and will find any means they can to avoid following the rules and properly dispose of their waste byproducts, because proper disposal costs money Mr. Leroy doesn't want to spend and it's easier to just dump it in the river. Despite all his efforts, Colrayn has never been able to persuade the corporation to do the right thing, and so deep are Mr. Leroy's pockets that any fines he levels at them amount to a slap on the wrist.

But mother nature may soon have the last laugh. Although initially it was merely oil that Leroy Inc. dumped, now radioactive chemicals are finding their way into the river and contaminating the ecosystem. Although it kills all the fish in the river, the native beavers and rats thrive on it, growing bigger and bigger and bigger. And with this increased size comes an increased appetite. And with all the fish they normally eat dead, the huge rodents will have to turn to... something else. Worse, their mutation has given them the powers of ESP, including the ability to will themselves from place to place, attacking unpredictably.

Together with his old friend Edward Sinclair, the local police force and a group of Territorials (army reservists), Colrayn must find a means of stopping the killer beavers before they can Take Over the World.