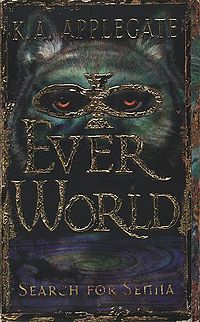 "You hopeless idiots. Where do you think you are? This isn't a church. This isn't America. And it's not Philosophy 101, Jalil! This is Everworld, you blind, stupid, ignorant, willful jackasses. You simple-minded, narrow morons, these aren't gods you argue about. You fight them if you have the power, and if you don't, then you do what they say."
— Senna, Brave the Betrayal.
Advertisement:

A Young Adult series written by K. A. Applegate and Michael Grant and published by Scholastic between 1999 and 2001, written alongside the duo's most successful title, Animorphs.

The series is about four teenagers with opposing personalities who are Trapped in Another World, where all of the classical polytheistic gods, demons and legendary heroes from various mythologies fled when people stopped worshiping them in the "Old World." While dealing with lunatic gods and insect aliens, they must find a way back to the Old World. Unfortunately, the only person who might be able to help them return is Senna, the witch who brought them to Everworld and shows up from time-to-time to either save their lives or travel with them and lend her magic to help. However, Senna has her own goals and plans for Everworld, and is more interested in bringing them to fruition than helping the rest of the group, and may be following a master plan darker than any of them could ever guess.

Everworld had many of the themes of Animorphs, but aimed at an older audience, so it got to include "fun" subjects such as alcoholism, homophobia, religious intolerance, prejudice, obsessive-compulsive disorder and, the best of all(?), pedophilic rape. Like Animorphs, each book was told in first-person narrative from one of the main characters' viewpoints.

In 2021, KA Applegate and Michael Grant confirmed the rights to the series were given back to them, and the series was rereleased in Spring 2022