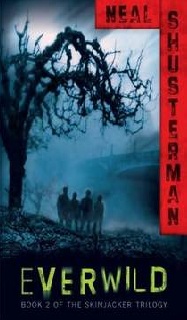 A novel by Neal Shusterman, and the sequel to Everlost.

The second novel of The Skinjacker Trilogy.

There was a rumor of a beautiful sky witch,who soared across the heavens in a great silver balloon. And there were whispers of a terrible ogre made entirely of chocolate, who lured unsuspecting souls with that rich promising smell, only to cast them down a bottomless pit from which there was no return.

Everlost, the limbo land of dead children, is at war. Nick the "Chocolate Ogre" wants to help the children of Everlost reach the light at the end of the tunnel. Mary Hightower, self-proclaimed queen of the lost children and dangerous fanatic, is determined to keep Everlost's children trapped within its limbo for all eternity. Traveling in the memory of the Hindenburg, Mary is spreading her propaganda and attracting Afterlights to her cause at a frightening speed.

Meanwhile, Allie the Outcast travels home to seek out her parents, along with Mikey, who was once the terrifying monster the McGill. Allie is tempted by the seductive thrill of skinjacking, until she learns a shocking secret: those who skinjack are not actually dead.