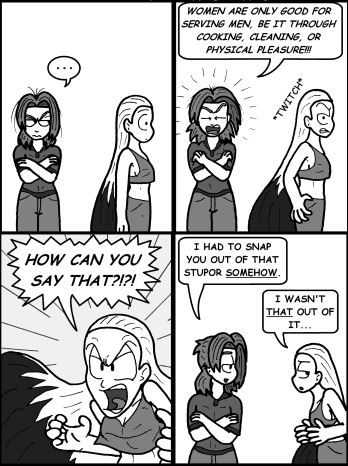 Transformed Susan is a little too fascinated with her reflection.
Professor Dr.: Breaking a hypnotic trance by sharp shock to the feminine self-esteem. Novel concept.
Snuka: But effective!
— The B-Movie Comic, "Revenge of Rutentuten #76"

When something (or someone) has entranced one of the Heroes, they'll often be in a hurry to get the victim moving. Fortunately, friends, teammates and co-workers often have a talent for making each other angry.

For some reason, that's especially true if they're completely different from each other and have been repeatedly forced by circumstances to endure each other's company...

Warning! The victim will remember the insult, and it probably won't be erased by having saved them. Be prepared for a (potentially violent) backlash unless you explain yourself. Heck, the backlash could be immediate if this trope involves hitting a Berserk Button.

Even More Than Mind Control isn't always enough to resist this. However, they can't be Insulted Awake if they're really Not Brainwashed.

A subtrope of I Shall Taunt You, which covers deliberately insulting someone for any of a variety of tactical reasons.

How does Gramma wake Dirtbag the family cat? Scare him.

How does Gramma wake Dirtbag the family cat? Scare him.