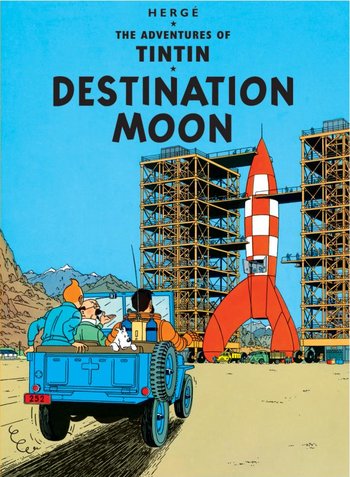 After returning to Marlinspike following a trip, Tintin and Haddock are surprised to find that Calculus had mysteriously left some time earlier. They immediately receive a telegram from the Professor explaining that he's in Syldavia and asking them to join him there. They do so and are led to a heavily guarded scientific research compound, where they are greeted by Calculus' assistant engineer Frank Wolff and the Professor himself. The latter explains that they are in Syldavia's Atomic Research Center, which recruited Calculus for their Astronautical section. Calculus is currently completing plans for a nuclear power rocket that will be able to land on the Moon...and he called Tintin and Haddock so that they will be part of the landing party. Despite both having some misgivings about the plan (especially Haddock) they accept.
Advertisement:

Of course, preparing for this unprecedented and utterly crazy venture is not simple or easy. To make matters worse, the preparation is plagued with incidents, ranging from the humorous (the Thompsons, who inexplicably were assigned as security engage in their traditional bungling) to significant (Calculus losing his memory, which puts the whole project in jeopardy though he ends up being cured by Haddock via ensued hilarity) to the serious (Miller, a mysterious spymaster working under an unnamed foreign power is interested in the project and almost succeeds in stealing the prototype rocket, only to be prevented by a Self-Destruct Mechanism installed at Tintin's suggestion). Despite all this, the rocket is completed and is successfully launched, with Tintin, Haddock, Calculus, Wolff and Snowy en route to the Moon... yet Miller seems to have an additional ace up his sleeve, involving Tintin's old enemy Colonel Jorgen...

The story is continued in Explorers On The Moon.