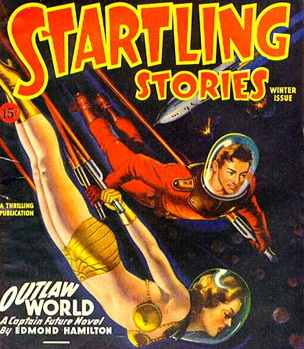 So how come the woman doesn't need a spacesuit to go with her helmet?
Henry McGee: Will he be able to live in it?
Fred Scuttle: I should think so, sir. Our goldfish lived in it for three weeks.
— The Benny Hill Show
Advertisement:

Want to be able to breathe in outer space or underwater? Easy — just place a fishbowl or a similar object on your head, and you're good to go. (To count for this trope, these don't have to be literal fishbowls — they just need the basic appearance of one.)

throughout the Apollo program, although this was eventually abandoned in favor of sturdier designs with bubble face plates.

Not to be confused with Mobile Fishbowl. Compare Artificial Gill. For characters who don't even need a fishbowl, see Batman Can Breathe in Space and Super Not-Drowning Skills. If somebody tries a space walk wearing nothing but this, it qualifies as a Space Mask.