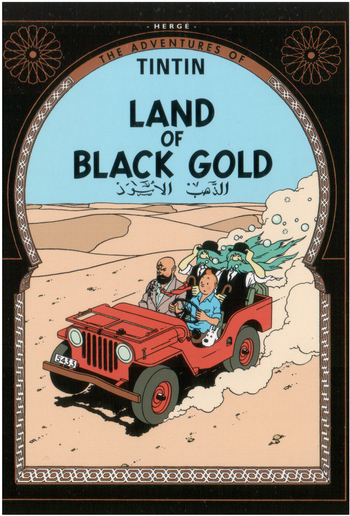 Land of Black Gold (1950) is the 15th adventure of Tintin, set in the troubled Middle East. The story starts with car engines exploding due to contaminated petrol. Most forms of transport cut down on their use of fuel until the situation is rectified, hurting the world economy, while mutual suspicion among countries leads the world to the brink of war. Tintin decides to investigate and finds himself involved in international intrigues, centered on who controls the precious black gold.
Advertisement:

The album re-introduces the villain Doctor J. W. Müller, who had debuted in The Black Island (1938). It has a complex publication history. The original version of the story was published in 1939-1940. Set in the British Mandate of Palestine, it had Tintin caught up in the then-ongoing Mêlée à Trois between the British colonial authorities, the Irgun (a Zionist militia engaged in terrorist activities, which would later lay down its arms, reform itself into the Herut party, and eventually merge with the Liberal Party of Israel to form the modern-day Likud), and local Arab insurgents. Müller was depicted as a Nazi agent attempting to take advantage of the conflict.

The story was never completed due to the events of World War II. Belgium was set under German occupation and Hergé could no longer depict Nazi villains, for obvious reasons. He discontinued the story and turned to safer story subjects for the duration of the War. In 1948, Hergé relaunched the story with several changes in art and script. The characters of Captain Haddock and Professor Calculus, created following the publication of the original version, were added to the plot. This version was completed by 1950, but was already looking dated at the time, as not only had the British Mandate had ended back in 1948, but also the new countries of Israel and Jordan had emerged in its place, and the Arab–Israeli Conflict had started.

In 1972, Hergé created a third version of the story that removed all references to actual locations and organizations. Changing the setting to the fictional country of Khemed, it featured a conflict between two of its internal factions, one under the reigning Emir Ben Kalish Ezab, the other under his rival Sheikh Bab El Ehr. The story had little to no resemblance to the then-ongoing Middle Eastern conflicts and removed significant characters from the previous versions.