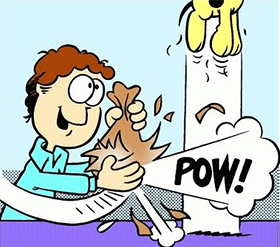 One character finds that his friend is asleep, so he tries various ways to wake him up, but nothing works. Finally, he gets the idea to blow up a paper bag then pop it while standing by his sleeping friend.

POP! The paper bag is popped and the sleeping character is wide awake.

Put more simply, this is a method to either wake up a sleeping character or to surprise another character, which may culminate in Surprise Jump.

There are also some cases where instead of just using a paper bag, a character will blow up a balloon and pop it with a needle, but it still has the same effect.