Recap / Tintin: Prisoners of the Sun 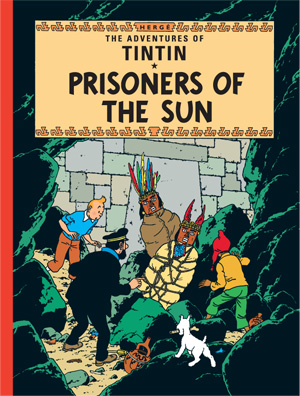 After the events of The Seven Crystal Balls, Tintin and Captain Haddock arrive in Peru and report Professor Calculus' kidnapping to the authorities. Unfortunately, they are unwilling to board the Pachacamac, the ship where Calculus is held since it's currently quarantined due to two cases of yellow fever. Tintin suspects this to be a lie and he and Haddock board the ship themselves. They an unable to find Calculus but confront Chiquito, who informs them that Calculus has committed "sacrilege" by wearing Rascar Capac's bracelet and will be put to death. Tintin and Haddock follow the kidnappers' trail, having to deal with assassination attempts and uncooperative authorities who seem to be afraid of something.
Advertisement:

After saving a young native boy named Zorrino from a couple of white bullies, Tintin is approached by one of Indians involved in the assassination attempts who urges him to give up for his own safety. Tintin refuses and the Indian gives him a medallion that will "protect him from danger". Tintin and Haddock are then contacted by Zorrino, who offers to guide them to the place where Calculus is being held: the Temple of the Sun, where the last remnants of Incan civilization reside. After arriving they are captured and all three are sentenced to death by the Prince of the Sun. Tintin gives the medallion to Zorrino who shows it to the Prince of the Sun, which prompts the Indian who gave it to Tintin (Huascar, the Prince's right hand man) to explain how he got it. The Prince is impressed by Tintin's sacrifice and lets Zorrino go but Tintin, Haddock and Calculus are still sentenced to death. However, the Prince allows them to choose the day and time of their execution.

The situation looks grim until Tintin reads an old newspaper article they were carrying which prompts him to hatch a plan. He chooses the day of the execution to coincide with a solar eclipse. During said execution, he pretends to be able to command the Sun which prompts the Inca to release them all. Tintin also convinces the Prince to release the curse on the Rascar Capac expedition. The curse is lifted and the explorers awaken.

Zorrino decides to stay with the Inca while Tintin, Haddock and Calculus return to Europe safe and sound.