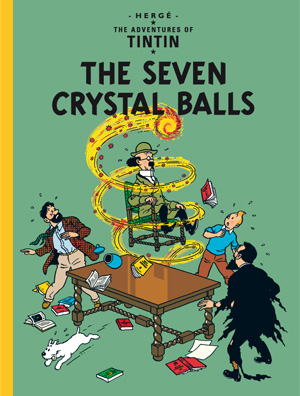 Tintin goes to visit Captain Haddock and Professor Calculus at their new home in Marlinspike Hall. On the train, he reads about a team of seven explorers led by Professor Sanders-Hardiman (Sanders-Hardmuth in the original French) returning home after a two year expedition in the Andes where they discovered the tomb of the ancient Incan ruler Rascar Capac, with the latter's mummy in tow. A strange man compares them to the Egyptologists who unearthed Tutankhamen's tomb and claims the same fate will befall them. Later on, Tintin attends a music hall with Haddock and is surprised to see General Alcazar, who since The Broken Ear was deposed and now is performing as a knife thrower. Another act by a psychic also mentions the expedition and warns its members are in grave danger.

Concurrent with these events, each member of the Sanders-Hardiman expedition starts falling into a mysterious coma, one by one. Thompson and Thomson are investigating and reveal that the only clue present at each scene are fragments of crystal spheres, which apparently contained some sort of mysterious gas that caused the comas. Despite the efforts of Tintin, Haddock, and the Thompsons, they are unable to stop the attacks and finally decide to personally guard the last explorer, Professor Tarragon (Bergamotte in French), an old friend of Professor Calculus, who accompanies them to the former's house. After Rascar Capac's mummy disappears from the house in a mysterious bolt of ball lightning, Tarragon claims that this is the culmination of a prophecy: Rascar Capac has "returned to his element" and will go after Tarragon personally. Despite the escort, Tarragon succumbs to the coma as well, becoming the last of the seven. To make matters worse, Professor Calculus is kidnapped after finding the mummy's bracelet.

Tintin and Haddock chase the kidnapper and manage to track him to the Pachacamac, a ship bound for Peru. Tintin also discovers that Alcazar's assistant Chiquito, one of the last descendants of the Incas is also involved. Tintin and Haddock depart for Peru to rescue Calculus, closing part 1 of the two-part story that concludes in Prisoners of the Sun.

The Seven Crystal Balls is the last story that Hergé produced as a daily comic strip for the "Stolen Soir" during the German occupation of Belgium. It was at first left unfinished after the liberation of Brussels restored Le Soir to its rightful owners and staff and Hergé was briefly jailed as a collaborator. Starting in 1946 was serialized once more and completed (with an extensive rewrite of the ending as far as it had been done in 1944) in the new comic magazine Tintin and then produced in album form. This enabled Hergé to take out old panels, add new ones, polish up the art and text and to change the layout without being bound by the constraints of the format used in the newspaper. This is most noticeable in the classic backstage slapstick sequence with Haddock in the music hall. A reprint of the 1943-1944 black-and-white strips with extensive comments and background information by Philippe Goddin was produced by Editions Moulinsart in 2012 under the title Les mystères des 7 Boules de cristal.