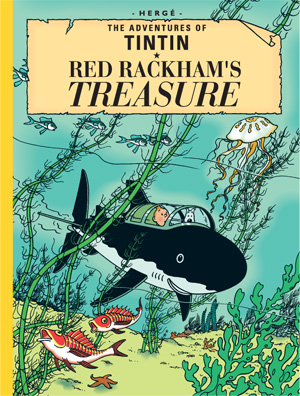 Red Rackham's Treasure (1944) is the 12th adventure of Tintin and a direct sequel to The Secret of the Unicorn. In the previous tale Tintin and Captain Haddock had discovered three parchments revealing the location of the Unicorn, a sunken ship. Said ship contains the treasure of famed pirate Red Rackham. In this adventure, the two friends set out on a naval expedition to locate the treasure. Accompanying them are Thomson and Thompson, determined to protect them from Max Bird, who escaped from prison after the previous book (though he never shows up).

The small group is joined by a stowaway, Professor Cuthbert Calculus. He is an inventor who insists that his one-man submarine is ideal for the mission. The Professor himself turns out to be very useful in locating the ship, as the centuries-old co-ordinates are less straightforward than originally thought. Calculus would become the last major addition to the cast of the series. The book is considered one of the highlights in the series and served as a change of direction for the protagonists, as by the end of the story Haddock becomes independently wealthy and the new owner of Marlinspike Hall, which becomes the main characters' residence for the remainder of the series.