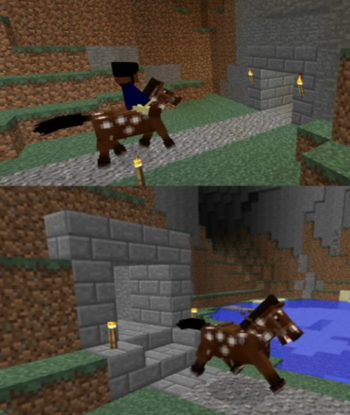 "The horse had a white face—Swan Circling's horse. Kaya caught her breath in relief. But as the horse came closer, out of the trees, Kaya saw that it was limping as though it was hurt—and that it had no rider."
— American Girls: Kaya
Advertisement:

A character sets out on horseback; later the horse returns alone. Cue ominous music as both the audience and the other characters realize something terrible has happened to the rider. The most common fates include being injured, kidnapped, or killed, although those aren't the only possibilities.

One common add-on is that the horse serves as a walking crime scene bearing clues to what happened. The horse may be injured or its tack may be damaged.

Another common add-on is inopportune conditions surrounding the ride: It Was a Dark and Stormy Night, Hostile Weather, or the natives are restless and a lone horseman is a good target.

The trope is most common is settings where horses are the standard mode of transportation, but it can equally occur where horseback riding is a recreational activity.

While it can become Somewhere, an Equestrian Is Crying if the scene is mishandled, the basic premise is accurate. A horse whose been on rides before knows the drill: you go out, then you return. At the stable there's food, water, and friends (horses are herd animals who bond with each other). And especially if the horse was spooked by whatever happened to the rider, they'll want to go home where they feel safe. In real life, the most common scenario is that nothing particularly "happened"—the horse was just Horsing Around or got spooked (horses spook easily), threw the rider, and ran off. The rider will return home on foot, bruised but relatively unharmed. In fiction, The Law of Conservation of Detail means that such mundane examples are uncommon.

Compare other Stock Ominous Signs, particularly Ominously Cut Tether. If the horse is a Sapient Steed who can tell you what happened, then it's Sole Survivor instead—here the point is that it's ambiguous and thus ominous.

Overlaps with Invulnerable Horses since by definition something happened to the rider but the horse is basically okay.

Expect unmarked spoilers as to the riders' fates!