Film / The Valley of Gwangi 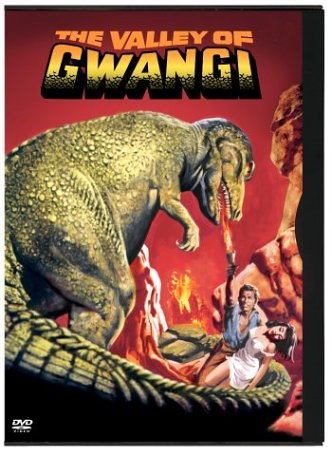 The Valley of Gwangi is a 1969 American film about cowboys fighting an Allosaur (not a Tyrannosaur, though it is often mistaken for one). The film is known for its Stop Motion Animation creature effects provided by Ray Harryhausen.

The idea had already been done years earlier in the movie The Beast of Hollow Mountain but "Gwangi" is the better known of the two. 'Gwangi' was originally conceived by Willis O'Brien, the man who did the special effects for King Kong (1933).

Sometime near the turn of the century, a cowgirl named T.J. hosts a traveling rodeo show, currently parked near a desert town. Her former fiancé, cowboy "Tuck" Kirby, wants to buy her out, but T.J. has hopes that her latest discovery -a tiny horse- will boost attendance to the show. A British paleontologist named Bromley declares the creature to be an Eohippus, a prehistoric horse.

The horse came from an area known as "The Forbidden Valley". A gypsy woman claims that it should be returned or they will all suffer the wrath of a being she calls "Gwangi". Later Bromley helps a group of gypsies steal the horse, (he hopes to follow it to its home). Tuck, T. J. and several of their cowboy helpers set out to recover it, and follow them into the valley.

It turns out the valley is a Lost World that has a variety of prehistoric creatures including a Pteranodon that attacks them, but the cowboys kill it. They are then attacked by the titular Allosaur. Gwangi battles a styracosaur and wins. The cowboys try to capture the monster by lassoing it around the neck and pulling it down with several horses. However they only succeed when Gwangi knocks itself out while pursuing them.

The cowboys take it back to the town where it is to be put on display in T.J.'s show. However on the opening night one of the Gypsies sneaks in and begins to unlock Gwangi's cage in an effort to free it. He gets killed for his troubles, and Gwangi escapes, killing Bromley and a circus elephant in the process.

Eventually Gwangi, Tuck, T.J and a Mexican boy named Lope end up in a cathedral which catches on fire. They (the humans, that is) manage to escape and lock the door behind them, trapping Gwangi in the burning building which then crumbles around it. The movie ends as everyone watches Gwangi die.