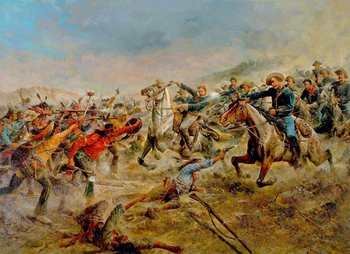 is a United States Army cavalry regiment, formed in 1866. For most of its early history, it was deployed by the United States in The Wild West. As soldiers of the U.S. Army, their enemy was often the Indians, as they were in Real Life. It was the unfortunate regiment to be beaten in the Battle of Little Bighorn and responsible for the Wounded Knee Massacre of December 29, 1890note  The exact circumstances of the massacre are lost to history, but it began when a deaf Mineconjou warrior named Black Coyote did not understand what was going on and refused to surrender his rifle. A shot was fired and some of the cavalrymen panicked and opened fire. Further details are subject to unreliable narrators, as almost all of the Indians who witnessed the start of the incident were killed, the regiment’s senior officers lied in official testimony to cover their own asses, and the "yellow" press falsely painted the massacre as a great battle against the savage Indian. The incontrovertible facts are that at least 150–possibly as many as 300–Mineconjou and Hunkpapa Lakota were killed, many of them women and children, almost all of them unarmed and simply trying to reach safety, and that some of the cavalrymen chased them down on horseback and shot them at point-blank range. The 7th Cavalry suffered 25 dead and 35 wounded, which was officially cited as proof of hostile resistance, but most (if not all) of them were hit by friendly fire. While many who weren’t there called it payback for Little Bighorn, many of the troopers present at Wounded Knee would later express remorse for it. General Nelson Miles was horrified by the massacre and blamed the regiment’s commander, Colonel James Forsyth, and relieved him of command, but the federal government quickly reinstated Forsyth as part of its effort to cover up the massacre and avoid bad publicity. Historically, the entire regiment was not wiped out at Little Bighorn, as "Common Knowledge" would have you believe. True, the five companies personally led by Generalnote  Custer had received a brevet (i.e. emergency temporary promotion during wartime) promotion to Major General during the Civil War, but with the war's end saw him reverted to his permanent rank of Lieutenant Colonel—which was still pretty impressive, considering the 26-year-old had only graduated from West Point (at the bottom of his class, no less, though 22 classmates had left to join the Confederate army prior to graduation) four years earlier. Prideful as he was, though, this stung Custer's ego sharply, and he would spend the remaining decade of his life looking for any way to get his general's stars back George Armstrong Custer were killed to a man, but the other half of the regiment under Major Marcus Renonote  Reno was accused of cowardice (not least by Libby Custer) afterwards. An official Court of Inquiry cleared his name, but his reputation was irreparably tarnished withdrew to a defensible position and survived. The massacre is often attributed to Custer being a Glory Hound (which he was), but poor intelligence drastically underestimating Sitting Bull’s numbers and a decision to leave the regiment’s heavy weapons behind (based on the poor intelligence) played a significant role as well.

They were often given an idealized portrayal in older media, while more recent works usually lean heavily to the opposite extreme. Neither is particularly close to Real Life. When Indians are involved, they are seen as organized thugs who make the lives of the Indians miserable. For the average citizen in a Western Town, expect some twisted form of martial law be carried out by this group. Kick the Dog and Shoot the Dog is standard procedure for the Seventh Calvary. Often the leader of the antagonists will be the Lieutenant of the regiment who is more often than not a Cavalry Officer, acting as the brain behind the attacks against the Indians and consisting mostly of General Ripper and The Neidermeyer type characters. Expect Custer, if he appears, to get a Historical Villain Upgradenote  While his conduct was by no means above reproach, Custer was apparently surprisingly sympathetic to the Indians in principle, which didn’t do his career any favors. This probably contributed to his gloryhounding against the Sioux as, despite his sympathies, Custer was very ambitious and had his sights set on General rank and likely a political career post-retirement. Like many controversial historical figures, George Armstrong Custer was neither a shining hero nor a sneering Obviously Evil villain.

Their theme song is "Garryowen". First Nations people are just about as fond of this tune as the Jews are of the Nazi Horst Wessel Lied. In 1998 the Native American women's a capella group Ulali performed a Take That! by appropriating "Garryowen" as a traditional choral chant. It forms the background to a poem celebrating the survival of Indian people, and is the song played over the closing credits to Smoke Signals.

The regiment remains an active unit, and has served with distinction in World War II and The Vietnam War, in particular the Battle of the Ia Drang Valley which was immortalized in We Were Soldiers. The Army ROTC unit at the New Mexico Military Institute wears the unit crest of the 7th Cavalry Regiment.