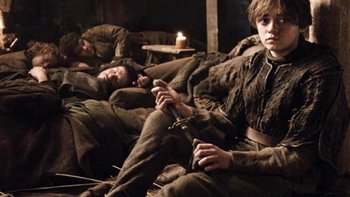 We pick up where the last episode left off, with the Night's Watch recruits on their way to the Wall. 'Arry' is encountering the problem every Sweet Polly Oliver comes across sooner or later—how to keep up the disguise when nature calls. Having come back from taking care of business in secret, she has a slight run in with the inhabitants of the cage accompanying their party, including a certain man who speaks of everyone in the third person, especially himself, and another man who threatens to rape her bloody with a stick. Lovely. Then the excitement really kicks in, as some Gold Cloaks intercept the caravan. Arya naturally assumes they're looking for her, but it's revealed that it's Gendry they want. Not that Yoren is going to give up either of them, as proved by his threat to place his sharp-enough-to-shave-a-spider's-ass knife at a very tender portion of the lead guard's anatomy—his femoral artery. Why, what where you thinking of? The Gold Cloaks back down for now, but it's clear they're not going back to King's Landing without Gendry, dead or alive.

In King's Landing, Tyrion walks in on a nasty surprise—Varys, happily chatting with Shae. Ominous. Tyrion is much quicker off the mark than Ned ever was, and says as such, outright telling Varys that if he tries to backstab him, he'll end up going for a terminal swim—perhaps keeping the theme of fish pie running? Varys seems almost amused by his threat—one gets the feeling he's been threatened by far worse in his time.

Small council time: Cersei listens calmly to Robb's demands, then proceeds to rip up the terms. Tyrion is temporarily possessed by the snark of the viewers: "You've perfected the art of tearing up papers." She does reluctantly concede to sending Ned's bones back up North, along with a not so subtle coded message for Jaime, but dismisses the request of the Night's Watch for more men, and laughes off their claims the dead are rising from their graves. Tyrion isn't laughing—he's been there, done that, pissed off the Wall, and some of what Mormont and Maester Aemon said has actually sunk in.

Way up north where men are men and marry their daughters (eeeeeesh), Sam has to rescue one of Craster's 'wives' from Ghost, and promptly all but adopts her. He brings the girl, Gilly, to Jon, where she pleads her case, saying she's pregnant and wants to protect her baby from Craster, since if it's a boy—and ominously cuts off. Jon's response is, "What am I supposed to do about it?," showing that he's learned his lesson from last week—besides which, Gilly expects them to help her without continuing to explain herself beyond the ominous cut off.

Precisely what Daenerys and her khalasar are getting up to in the Red Waste this time around is a short scene but contains a lot of incident. Rakharo's horse comes back with a rather snazzy paint job but, not so snazzily, without Rakharo—save for a nasty surprise in the saddle bag. Jorah says that the sender of this grisly little gift was probably one of the many, many khals who don't appreciate the idea of a woman ruler. Poor Irri is distraught, since not only did Rakharo lose his head, he also lost his braid—a sign of defeat—and, since who knows what's happened to his body, he won't be able to get to the Dothraki afterlife. And on top of all that, she secretly loved him! Dany promises her handmaiden that they will build a pyre for Rakharo—though, considering there isn't that much wood about, it's probably just as well it'll be a very small pyre.

In his brothel, in the midst of making certain all the customers are satisfied, Littlefinger runs across a problem—Ros is, understandably, more than a little shaken from seeing her best friend's baby killed in front of her yesterday. Littlefinger, charitably, suggests she take the day off and turn up tomorrow bright and cheerful—because, he tells Ros, he ended up selling the last whore who cried and moped all the time to a man who wanted to 'transform' her. (And not in a Henry Higgins way.) Ros gets the message very quickly, and we are reminded once again that Littlefinger is not a nice man. At all.

In The Red Keep, Tyrion entertains Janos Slynt to dinner. The interview goes about as well as you might expect for Janos, who ends up stripped of his post and exiled to the Wall. Tyrion drinks a toast with the new captain of the City Watch—then proceeds to ask him, out of what can only be morbid curiosity, if he could do what his predecessor did: kill a baby without question. "Without question? No. I'd ask how much." That's our Bronn. Tyrion seems sickened, but not surprised. Like we said, morbid curiosity.

When the Night's Watch recruits stop for a break, Lommy Greenhands muses about giving up Gendry, since he's the one the Gold Cloaks want. After an enlightening discussion about what makes both a battle and a knight, Arya goes after Gendry, curious as to why he seems to be hotter property than her. He's no more clue than she has, but he does know one thing—turns out the Sweet Polly Oliver act hasn't fooled at least one person. For lack of anyone else, Arya entrusts him with her secret.

Theon just can't catch a break. He expects a grand greeting to welcome him home to Pyke as the long returning last Greyjoy son—he gets one fisherman who is singularly unimpressed. Things are looking up when he hitches a ride with a feisty young woman up to the castle, with whom he gets rather friendly—turns out he's been sticking his hands inside his sister Yara's trousers. Who, incidentally, finds the whole thing hilarious, and has spent the last nine years being a much better Greyjoy son than he has. So much so, in fact, that daddy Balon regards her as his heir, and not the son who came home wearing jewellery he hasn't paid the 'iron price' for and bleating the praises of the Starks. Balon believes this moment of strife is the perfect time to stage another uprising. Against the Lannisters? Who, pray tell, said anything about the Lannisters? It's Theon's new family that are going to catch it hard.

On Dragonstone, Davos is sorting out a deal with Sallador Saan, an old friend in the pirate business; Stannis's knight had an interesting career before he came to serve him. Negotiations include Sallador claiming Cersei and part of his fee for helping to take King's Landing; after all, "The only god is between a woman's legs." Davos's son thinks that the only god is Melisandre's R'hllor, having been fully converted, while to Davos the only god is Stannis.

Meanwhile in King's Landing, Cersei is pissed that Tyrion exiled Slynt without her say so; she's the Queen Regent! Tyrion implies she's been throwing that title around so much she's forgetting the consequences; a lot of people in King's Landing are very angry with the baby-slaughtering queen, even if it was Joffrey who gave the order and let his mother take the fall. Charming lad. Cersei still believes her son was in the right and that Tyrion isn't taking this seriously—he never has, nor has Jaime. "It's always fallen on me!" Tyrion is rather taken aback by this show of emotion and strain on his sister's part, and tries to lighten the mood—in the worst way possible. "So has Jaime, according to Stannis." Smooth, Tyrion. Real smooth. Cersei soon wipes the smile off his face by saying that the biggest joke has always been that the stunted Tyrion is alive at the cost of their mother's life. Tyrion was asking for something like that, but still. Ouch.

Back to Dragonstone, as Davos tells Stannis that Sallador and his thirty ships are arrayed with them against Renly, but this news doesn't exactly cheer Stannis up—Renly still vastly outnumbers him. Melisandre tells him that if only he opens himself fully to the Lord of Light (as she opens her robe, revealing that was all she chose to wear tonight) he can be given all that he ever desired—such as a son, which is what really captures his interest, rather than what's under the robe. She and Stannis proceed to pray the Summer Islands way—right on top of the Painted Table, while pieces are scattered in the process. That can't be comfortable.

Then to Craster's Keep. Despite Jon's refusal of Gilly due to the ominous cutoff, he's suspicious enough of Craster to follow him into the woods. The question of what Craster does with his sons is answered, as the wildling abandons a crying baby to the tender mercy of... whatever's out there. This is too much for Jon, who attempts to save the child—only to see something pick it up and retreat into the woods. And, before Jon can proceed further, Craster fells him with the flat of his axe. Cut to black.