Literature / The Legend of Sleepy Hollow 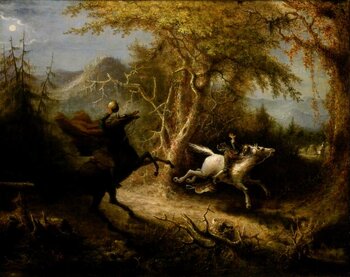 "On mounting a rising ground, which brought the figure of his fellow-traveller in relief against the sky, gigantic in height, and muffled in a cloak, Ichabod was horror-struck on perceiving that he was headless!"
Advertisement:

"The Legend of Sleepy Hollow" — also known informally (and somewhat incorrectly) as "The Headless Horseman" — is a short story by American author Washington Irving, originally published in February 1820 as one of a series of stories later collected as The Sketch-book of Geoffrey Crayon, Gent. As with a number of Irving's stories, the plot is based on German folk legend (particularly in the re-told versions of Karl Musäus), transplanted to a Hudson Valley, New York setting, and mingled with Irving's genial satire of human, and particularly American, foibles.

The story has been subject to a great many adaptations since Irving's time, with the "quilting frolick" of the original frequently getting transferred to Halloween.note In actuality, Halloween was not widely celebrated in the United States at the time the story was written, let alone when it takes place. The holiday only started to catch on in the U.S. when Irish and Scottish immigrants brought it over in the mid-19th century. In more than one adaptation it is strongly hinted that the Horseman is a genuine supernatural apparition, although the original story leaves things more ambiguous.

Tropes associated with "The Legend of Sleepy Hollow" include:

Adaptations based on "The Legend of Sleepy Hollow":