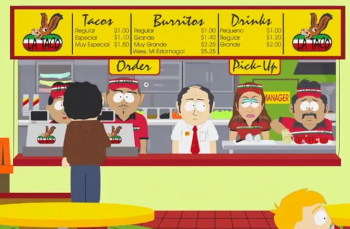 Even Jennifer Lopez has to work under this gringo.
"Should Americans pick crops?
George says 'no'
Cuz no-one but a Mexican would stoop so low
And after all, even in Egypt, the Pharaohs
Had to import Hebrew braceros."
— Tom Lehrer, "George Murphy", That Was the Year That Was
Advertisement:

Throughout history, there have been stereotypes that certain ethnicities are more prevalent in menial labor such as maids, nannies, and farmhands. This stereotype is often an exaggerated case of the truth: Certain minority groups have indeed been over-represented in menial jobs due to a variety of factors. In Politically Correct History this will be carefully sidestepped, but in accurate or exaggerated Period Pieces and Historical Fiction, the older versions of this trope can still be found.

In modern incarnations, the ethnic group is often one of the Acceptable Ethnic Targets.

In the United States

Irish immigrants to the United States were often considered "backwards" and only fit for menial labor. This led to many of them having no choice but to accept such jobs. Female immigrants often worked as washerwomen or maids; the term "bridie" or "bridget" meaning "maid" stems from their prevalence in that field. Males worked on farms, on the railroads, and at similar, back-breaking tasks. They continued this role far into the next period, working alongside the Black slave and later Black Laborer. (In the ante-bellum Deep South, they were hired slave overseers.) They often did jobs considered too dangerous for slaves—after all, once the slave trade was abolished and the only way to get more was to breed them, a slave became a valuable investment, while Irishmen were dime-a-dozen, and more were coming over all the time.

It wasn't until the early part of the 20th century that the Irish were finally seen as "white" (for centuries they were seen as a completely different race from the English) and thus finally began to cast off a lot of the explicit racism held against them (many businesses had so-called NINA rules, an acronym for No Irish Need Apply). Like many previously discriminated communities facing a new level of upward mobility, the Irish joined the police force in record numbers in the hopes of improving their reputation in the community — Officer O'Hara is a subtrope of this; it's also the reason older media refer to police cars as "Paddy Wagons."

In Britain, a similar stereotype for the male Irish workman emerged, as most of England's canal network in the Industrial Revolution was made by Irish labour teams (as it was cheaper). The slur "Navvie" refers to this stereotype and is highly insulting to many Irishmen today.

Only very old media covered this trope at the time, although you can still find it in Historical Fiction and Period Pieces that are trying for historical accuracy.

Discrimination relegated most Chinese immigrants to menial labor after they entered the United States. This trend was mostly contemporary with the Irish Laborer. The Chinese suffered especially hard in the 1870s when legislation denied them the basic rights of citizenship based on their ethnic origin.

Some of this can still be found to this day with the Chinese Launderer. The most commonly seen historical figure is the Chinese Railroad Worker, although the girl illegally imported and sold into prostitution can be seen in media representing the early 20th century, as well.

Black Americans released from slavery often had to accept positions as menial laborers. The reasons for this were both a lack of training and deep-seated prejudice that kept them from rising higher in society. This would continue until after the Civil Rights Movement.

Literature from this period will often evoke this trope.

One recurring figure from this period is the Mammy, a nursemaid who would continue to provide an important mothering role well into adulthood. The Black Maid, Black Farmhand, and Black Railroad Worker are also common. There are a lot of parallels between Mammy types and Magical Negroes.

A combination of political correctness and a movement toward this ethnic group genuinely become overrepresented in menial labor has shifted modern media to the Hispanic Laborer. Latin immigrants to the United States tend to be poorer than most, and thus rarely have the education necessary for jobs above the service industry. For illegal immigrants, their choices are even narrower: They must take jobs that can be paid under the table. This has led to a disproportionate number of Hispanics in jobs involving manual labor, especially in states bordering Mexico. Since California is where most of those movies and TV shows are made, this trend is carried over into modern media, though good luck finding any Latin characters even in shows that are set in L.A., a city that now is more than 50% Hispanic.

Hispanic Laborers will always have a thick Mexican accent and will be prone to sprinkle their (sometimes unusually precise) English speech with Spanish words or sentences. Alternatively, they will not speak English at all. They will also have the stereotypical Latino look of brown skin and dark hair. The most common variant is the Hispanic Maid. Also often seen are the Hispanic Pool Boy, Hispanic Farm/Ranch Hand, Hispanic Busboy/Dishwasher, and Hispanic Gardener.

Note that if the employer is Hispanic, the laborer will be of any ethnicity but Hispanic.

Though rarely depicted in modern fiction, during the 19th century Hawaiian workers were widespread throughout the West Coast and into Canada; back when Hawaii was still an independent kingdom. Hawaiians came to the United States to work as fur trappers, sailors, cooks, cowboys, fishermen, miners, field hands, and many other jobs.

Also now rare in modern fiction (in fact, it seems to have been rare in any fiction unless written by Filipino-Americans), this especially became common in the early 1900s, when the U.S. invaded and colonised the Philippines (seizing it away from Spain), and many Filipino men came to work to the American mainland, mostly as farmers on fruit and vegetable plantations, but also as fish cannery workers, sailors, houseboys, and dishwashers and restaurant workers in existing ethnic enclaves like the various Chinatowns. Many of this early wave of Filipino labourers, now known as manongs (roughly, "big brothers" or sometimes "uncles"), were also drafted to work in Hawaii itself (then also a U.S. colony, like the Philippines was), thus producing a bit of overlap with the Hawaiian Labourer example, above. Filipino-American author Carlos Bulosan's America Is In The Heart is a classic exploration of this labour class.

Britain, by virtue of having one of the most open policy toward immigration from the 2004 EU entries (second only to Ireland and Sweden), also has a lot of manual labourers and tradesmen from Eastern Europe, mostly Poland but with a sizable minority from Lithuania and Slovakia. Contrary to popular belief, most are expatriates rather than immigrants, arriving in the country with the intention of working for a few months and then returning home. At one point there were believed to be more than a million migrant workers in the United Kingdom; there are fewer nowadays as the source countries have become more prosperous, making it less profitable to work there. They show up or are referenced in quite a few works set in post-2004 Britain; fictional examples are almost invariably Polish.

This stereotype can also be seen in the United States with the au pair nanny, who is not menial in reality but is often treated so in fiction. She is a young European girl, usually Swedish, Norwegian, or Finnish, for some reason. Occasionally she'll be German or French (or some flavor of Caribbean). Germans and French were more common in the post-World War II period through the 1970s, as those countries were still rebuilding their ruined economies and a trip to America was a good way to get ahead.

By virtue of the proximity of Spain, France, and Italy to North Africa, and the colonial links between them (Algeria and Tunisia were French colonies, Morocco was a joint French and Spanish colony, and Libya was an Italian colony), the stereotypical immigrant laborer in these countries is an Arabic-speaking North African. Many of them are illegal immigrants, but most are in the country legally; many are there on temporary work visas and intend to return home rather than stay permanently. Stereotypes of these are a peculiar mix of what Americans think of menial black labor and general Arab/Muslim stereotypes (i.e. covered women, bearded men, and general religious fanaticism), although the latter bit is only true of a small segment of the population.

Contrast Meido, a maid who is invariably the same race as her employers (or at the very least some flavor of Japanese).