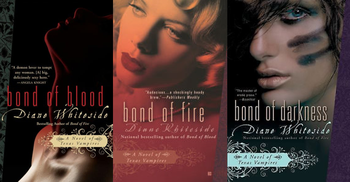 A trilogy by Diane Whiteside, focusing on the vampire that rules the Texas territory, Don Rafael Perez, and his children, and their respective love interests. The entire series takes place (mostly) during a period of time when Texas is involved in a Secret War with the crazy New Orleans patrona, Celeste. Flashbacks occur regularly.

The three main novels (there are some short stories taking place in the universe too) are: