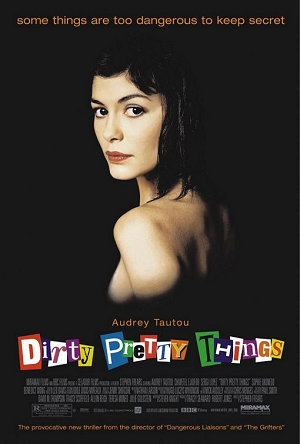 A 2002 British thriller focusing on the lives of immigrants in London, directed by Stephen Frears and starring Chiwetel Ejiofor and Audrey Tautou.

Okwe (Ejiofor) is an illegal immigrant from Nigeria who was a doctor in his native country but had to flee under mysterious circumstances to London. There, he supports himself by working as a cab driver by day and a hotel desk clerk by night, chewing khat leaves to stay awake throughout his long shifts. He rents a couch from one of his coworkers at the hotel, Senay (Tautou), a Turkish woman who, though she is in the United Kingdom legally, is forbidden to work under her status as an asylum seeker. His other acquaintances include Ivan (Zlatko Buric), a burly Russian who works as the doorman for the hotel, Juliette (Sophie Okonedo), a lower class English prostitute who meets her clients there, and Guo Yi (Benedict Wong), a Chinese doctor who works in a hospital mortuary and supplies Okwe with prescription drugs for the other illegals employed at his taxi company on the sly. Overseeing operations at the hotel is Juan (Sergi Lopez), a suave but shady Spaniard with his fingers in all manner of sleazy goings-on.

One day, Okwe makes a disturbing discovery while investigating a clogged toilet in one of the rooms - a recently removed human heart. Realizing that there has likely been foul play, the highly moral and conscientious Okwe begins to investigate despite being advised by both Juan and Guo Yi not to involve himself. Complicating his efforts to uncover the truth is his immigration status - because he's in the country illegally, he can't go to the police, and he has to be careful who he crosses because anyone who learns the truth about him can report him. Senay, meanwhile, is forced to dodge the investigations of a pair of immigration officials who are convinced she is working illegally, which complicates her budding friendship with Okwe and threatens her dream of saving enough money to start a new life in America with her cousin. Okwe is determined to both uncover the circumstances of the mysterious death and help Senay, but as he says himself, justice may be an impossibility when simply surviving is so difficult.