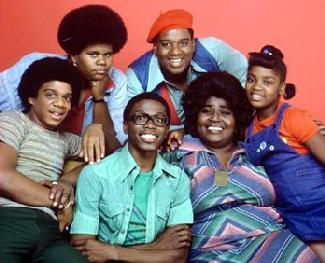 What's Happening!! is a sitcom that aired on ABC from 1976–79. It was very loosely adapted from the movie Cooley High (which was written by the show's creator, Eric Monte).

Taking place in the Watts section of Los Angeles, it centered on a African-American teenager named Roger "Raj" Thomas (Ernest Thomas) as he attended school and interacted with his friends and family. Along with Raj, other recurring characters include his friends Dwayne Nelson (Haywood Nelson) and Freddy "Rerun" Stubbs (Fred Barry); his younger sister Dee (Danielle Spencer); their mother Mabel (Mabel King); and Shirley Wilson (Shirley Hemphill), a waitress at the local hangout, "Rob's Place."

The show started off as a 1976 summer pickup, but was made into a regular series following decent ratings. It downplayed the African-American cast and settings, with most plots featuring typical teen Dom Com staples such as dealing with school, dating girls, and planning for the future.

A revival series, What's Happening Now!!, ran in syndication from 1985 to 1988. Following up with the characters several years later, it depicts Raj and his wife Nadine (Anne-Marie Johnson) living in the Thomas home, while Rerun and Dwayne share an apartment. Hilarity Ensues.

The entire series is available on DVD.