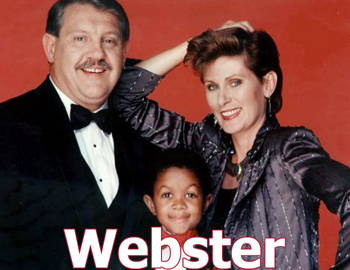 George, Webster, and Katherine Papadopoulos
"1980's TV show, that tiny kid who's, like, 40 in real life? You know, his parents die, so the dad's old football buddy adopts him; George Papadopoulos and his wife Katherine. But Webster calls her 'Ma'am.'"
— Cyborg explaining the show's premise.
Advertisement:

Webster was ABC's answer to the long-running NBC sitcom Diff'rent Strokes ... especially with its showcase star and even down to the basic concept (a young African American child being adopted by a white family).

The showcase star on Webster was Emmanuel Lewis, who played the title character. At 4-foot-3, the 12-year-old Lewis easily passed for 6 or 7 (the character's age at the start of the series in 1983), which was Webster's age when he was adopted by George and Katherine Papadopoulos (real-life couple Alex Karras and Susan Clark) in the series' pilot. Webster, you see, was the son of a professional football star (Travis Long), who was teammates and best friends with George ... until one tragic day when Travis and his wife, Gert, are killed in a car accident. George and Katherine take in the now-orphaned Webster and become one happy family. The series was set in Chicago, where retired-from-the-gridiron George worked as a sportscaster, while Katherine was a socialite from a rich family working as a psychologist.

Other regulars were Henry Polic II (as Katherine's male secretary and Webster's confidant, Jerry Silver) and Eugene Roche and Cathryn Damon (as Bill and Cassie Parker, who lease the Victorian house the Papadopoulous family lives in; George and Katherine buy the house outright in a 1986 episode, after which the Parkers move offscreen to Florida).

The show was created and executive produced by Stu Silver and was produced throughout the run by Paramount and Georgian Bay, Ltd., Karras and Clark's production company. After the third season ended, Emmanuel Lewis Entertainment Enterprises, Inc. was established and became a third production company. This was actually part of an agreement between Karras and Clark, Paramount, and ABC, in which Emmanuel Lewis would get production credit alongside them in order for ABC to stop making the story lines be "all Webster, all the time."

The series ran from 1983-1987 on ABC before spending its final two first-run years in syndication. By the time the final first-run episode aired in 1989, Webster was 12 years old and getting ready to enter junior high school; in real life, Lewis had just turned 18.

Lewis, by the way, was frequently compared to Gary Coleman ... that other cute, pint-sized TV star of the era. Coleman was 4-foot-8 at adulthood, thanks to a genetic kidney disorder that hindered his physical growth; Lewis has said in interviews that there has not been a medical explanation for his tiny size.