Film / The Horror of Party Beach 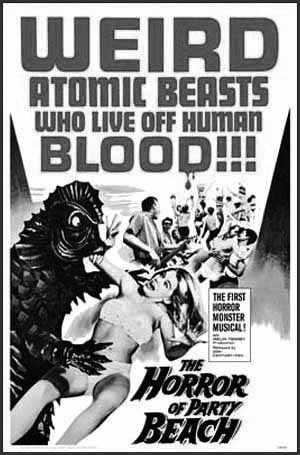 "The first horror monster musical," released in 1964 by director Del Tenney. It is not a real musical, as it spends only about the first ten minutes with some musical accompaniment.

Because it's a "monster musical," the first three hours of this 78-minute film take place at a beach where suspiciously middle-aged teens boogie to a live band while making lame attempts at humor. A college grad named Hank and his immature and unpleasant lady pal Tina drop by. The two bicker, Tina's flirting sparks a brawl with a biker gang, and finally the girl runs off to go swimming and is killed by a monster.

Turns out someone's been dumping barrels of radioactive waste into the ocean, causing the skeletal crew of a sunken ship to mutate into frog-fish things that proceed to hunt down and kill every young woman they can find. The elderly and ineffectual Dr. Gavin, assisted accidentally by black servant Eulabelle, discovers that the things are vulnerable to elemental sodium. Taking their time, the heroes eventually get around to tracking down the monsters' lair (as the kill count climbs ever higher), work up the energy to get a load of sodium, and then throw it on the horrors of Party Beach.

Oh, there's also a replacement love interest for Hank named Elaine, but she doesn't do much besides not die. And all her dialogue has been redubbed by someone even older for some reason. And she's played by the sister of the lead, explaining the complete lack of sexual chemistry between them.

The film was revived from obscurity by both Michael Medved's 50 Worst Films Of All-Time, and by having clips of it in the film It Came from Hollywood, before being a 1997 episode of Mystery Science Theater 3000, where it found a whole new generations of fans.