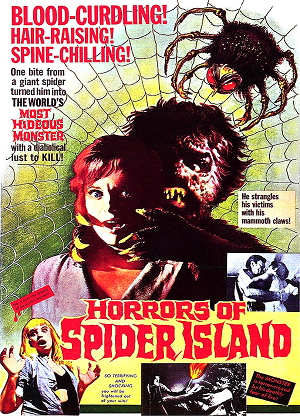 (The) Horrors of Spider Island is a 1961 Exploitation Film.

A troupe of dancers is assembled in New York City for a special performance in Singapore. Unfortunately, their plane crashes and the survivors (the troupe plus their manager Gary and his assistant Georgia) become castaways on an island. A little exploration reveals that the island used to be the home of a scientist mining for uranium, before he was killed by spiders. One night Gary gets bitten by a spider and turns into a spider-monster, stalking his former friends and killing them.

The film was a German flick, but represented an interesting midpoint in cinema between the traditional horror film and the nudie cuties that would pop up in the early-to-mid 60's that would lead to the eventual creation of the MPAA ratings.