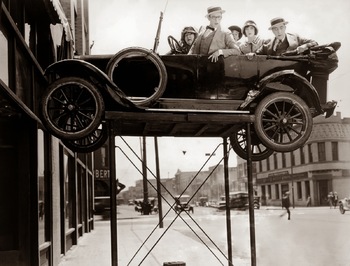 Don't you hate it when that happens?
Experience Awful Wedded Life with Harold Lloyd in 1924's Hot Water. Actually, the problem isn't so much his wife as it is the Obnoxious In-Laws that she's brought into his life. They consist of an overbearing mother-in-law, a lazy-ass older brother-in-law, and a bratty younger brother-in-law.
Advertisement:

The film is essentially episodic, containing three distinct episodes. In the first episode, Harold is out grocery shopping when he happens to win a live turkey in a raffle, and hijinks ensue when he tries to bring it home on the trolley. The second episode features Harold taking the family out for a spin in his new automobile. Needless to say, it ends with the car being totalled. In the third episode, a series of coincidences lead Harold to believe that he has accidentally killed his mother-in-law. He frantically attempts to escape from the police, whom he thinks are trying to arrest him for murder, and later from his sleepwalking mother-in-law, whom he believes to be a ghost haunting him.