Film / Hearts of the World 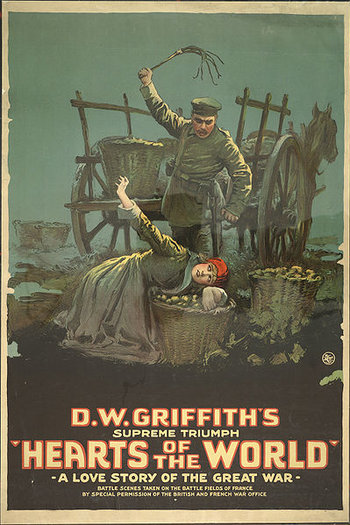 The Girl (Lillian Gish) and the Boy (Robert Harron) are two young lovers who, despite both being American, both live in a small town in northeastern France. The presence of the Little Disturber (Dorothy Gish), a tomboyish sort with a hankering for the Boy, briefly threatens to disrupt their relationship, but the Girl and the Boy get past it and get engaged to be married.

Unfortunately the wedding of the Girl and the Boy is scheduled for early August, 1914. World War I intervenes, and the Boy volunteers to fight for his adopted homeland. The French make a brave stand but are soon forced into retreat, and the Germans take possession of the little village. The Girl's mother and the Boy's father are both killed by shelling. The Germans in the village conduct themselves like stereotypical rapacious Huns. One, a particularly loathesome officer named Von Strohm, lusts after the Girl.

Hearts of the World came about as a direct result of the British government hiring D.W. Griffith to make a pro-Allied film that would encourage American intervention in the war. By the time production started the United States had already declared war on Germany, but the film went ahead anyway, and it is a not-at-all subtle Propaganda Machine. The protagonists are Americans for no other reason than to show Americans volunteering to fight for France. Griffith, who was very anti-war, later regarded this film as an Old Shame.

Erich von Stroheim has a small part as a German officer (but not "Von Strohm", the main villain). Noël Coward has an even smaller part, one scene as a village youth pushing a wheelbarrow.