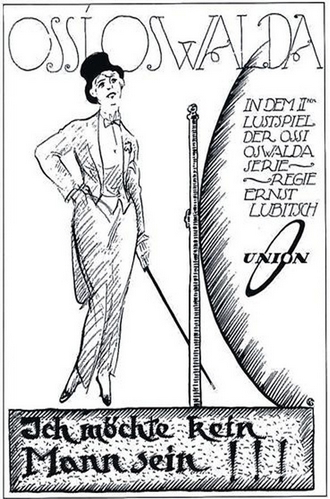 A Comedy in Three Acts by Ernst Lubitsch

"Being a man - is really very exhausting!"
— Ossi Oswalda.

I Don't Want to Be a Man (Original Title: Ich möchte kein Mann sein) is the story of Ossi Oswalda (Ossi Oswalda,) an uncontrollable teenage Lad-ette who drives her uncle, Counselor Brockmüller (Ferry Sikla,) and Governess (Margarete Kupfer) mad with her excessive drinking, smoking, gambling, flirting and generally overemotional behavior. When her uncle leaves the country to oversee his newly founded institute, the handsome young Dr. Kersten is appointed as her new guardian in the hopes that he will teach her to be more ladylike. Instead, Ossi takes the opportunity to sneak out of the house and - jealous of the freedom men posses - disguise herself in tailor-made male formal wear to experience the night life from the other side. Unfortunately, Dr. Kersten is also going out clubbing, and he just happens to hit the same club as Ossi...

This was the eighth out of twelve collaborations between Ernst Lubitsch and Ossi Oswalda. It is notable for featuring a ton of Homoerotic Subtext at a time where such relationships were illegal. To some extent, it could be said to have anticipated next year's Different from the Others. Because of its content, it was initially given an "Adults Only" rating, but it has since been re-evaluated as "Appropriate for All Ages" in Germany.

There exists two different DVD editions of this film: An American 2007 release by By Kino International,

line. The former has English intertitles, while the latter has German intertitles with English subtitles.