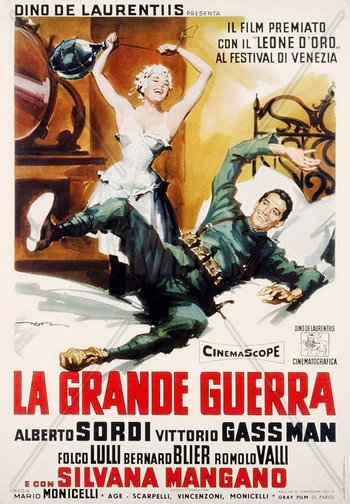 The Great War (La grande guerra) is a 1959 film directed by Mario Monicelli.

It is a tragicomic tale of two common Italian soldiers in World War I. Giovanni and Oreste meet for the first time at an induction center when the former pays the latter thirty lira to get him out of being drafted, only for Oreste to simply pocket the money. Giovanni is angry, but soon the two are fast friends. They go through basic training together and soon enough, they are on the front lines of the front against Austria.

At the front they go through the usual misadventures of soldiers in war: complaining about rations, getting letters from home, trying to avoid being killed. Giovanni falls for Costantina, a high-spirited prostitute (Silvana Mangano). Meanwhile, the war, in all its violence and horror, goes on.