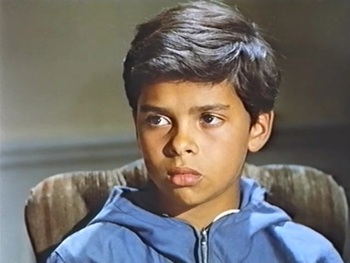 Paw is a 1959 film from Denmark directed by Astrid Henning-Jensen. It is also known as Boy of Two Worlds.

A boy of perhaps eight who is called "Paw" (yes, that's his name) arrives in Denmark from the West Indies. It seems that he's the child of a Danish man and a West Indian mother. His mother died in childbirth and his father just recently died, leaving the boy an orphan. So that's why Paw has arrived in Denmark on a boat to live with his only relative, his father's sister.

Paw's introduction to school goes about as well as might be expected for a dark-skinned Caribbean boy in Denmark, as he is relentlessly bullied by the racist boys in class. Then his aunt dies, and Paw faces the prospect of life in an orphanage. He's saved from that when local fisherman Anders, who's taken a shine to the boy, steps up and offers to be Paw's guardian, but more difficulties lie ahead.