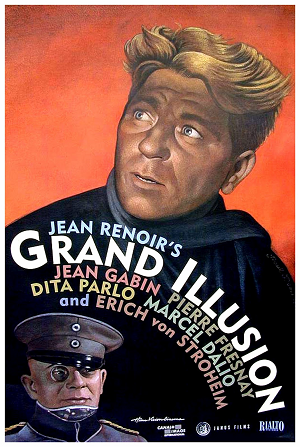 The Grand Illusion (French: La Grande Illusion) is a 1937 war film directed by Jean Renoir, who co-wrote the screenplay with Charles Spaak.

During World War I, two French aviators, aristocratic Captain de Boeldieu (Pierre Fresnay) and working-class Lieutenant Maréchal (Jean Gabin), embark on a flight for a reconnaissance mission. They are shot down by a German aviator and aristocrat, Captain von Rauffenstein (Erich von Stroheim) who upon returning to base, sends a subordinate to find out if the aviators are officers and, if so, to invite them to lunch. During the meal, von Rauffenstein and de Boeldieu discover they have mutual acquaintances. From there the French aviators are moved to an officers' POW camp.

Here they are quartered in a room with other French officers, including Lieutenant Rosenthal (Marcel Dalio), the son of a Jewish banker, who supplies the others with food and delicacies sent from France via the Red Cross. The officers are digging a tunnel to escape from the camp, but shortly before it is finished, they are transferred to another camp. After several transfers (and failed off-screen escape attempts), de Boeldieu, Maréchal and Rosenthal are reunited in a camp in an old castle. The commandant is Major von Rauffenstein, now invalided out of frontline duty; he feels an affinity towards fellow aristocrat de Boeldieu, and talks with him about how the World War I is bringing an end to the class they belong to and its code of honour. De Boeldieu provides the diversion necessary to permit Maréchal and Rosenthal to escape, forcing Rauffenstein to shoot him.

As Rauffenstein mourns the death of the man he wanted to be his friend, Maréchal and Rosenthal try to reach the border of neutral Switzerland on foot, but exhaustion and lack of food take their toll. They eventually find shelter in the farm of war widow Elsa (Dita Parlo) and her daughter Lotte. They stay over Christmas and Maréchal falls in love with Elsa, but eventually they have to leave because it is their duty to finish the war. Maréchal promises to return after the war and take Elsa with him to Paris.

This film, released a decade before the Academy Award for Best Foreign Language Film was given out, was the first film in a language other than English to be nominated for Best Picture. It remains one of only nine. It was also the first film released on DVD by The Criterion Collection note Actually, it would've been, but the release was delayed for a year when the long-lost original camera negative was discovered.. Oh, and Maréchal's uniform? That was Jean Renoir's uniform from when he fought in World War I.