Film / A Day in the Country 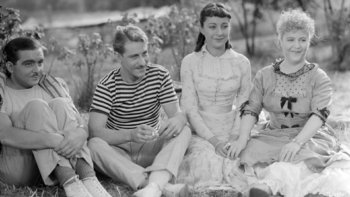 A Day in the Country (Partie de campagne) is a 1936 short film (40 minutes) directed by Jean Renoir.

M. Dufour, who owns a Paris dairy business, takes his family for a country outing. Said family consists of his wife Mme. Dufour, his grandmother, his daughter Henriette, and his assistant Anatole, who has been designated to marry Henriette and one day take over the dairy business. They stop off at the country inn of one Poulain (Jean Renoir), and have a picnic.

Poulain's rambunctious young workers, Rodolphe and Henri, take an immediate interest in the two attractive women. Henri says he'd prefer getting with the mother as it would be no strings attached, while sex with the daughter would run the risk of both pregnancy and emotional attachment. As it happens, however, Henri does form a rapport with Henriette, one which leads to an unexpected emotional attachement.

Origininally intended as a feature, but delayed and then halted when Renoir moved on to other projects like The Grand Illusion. Finally released as a 40-minute film in 1946.