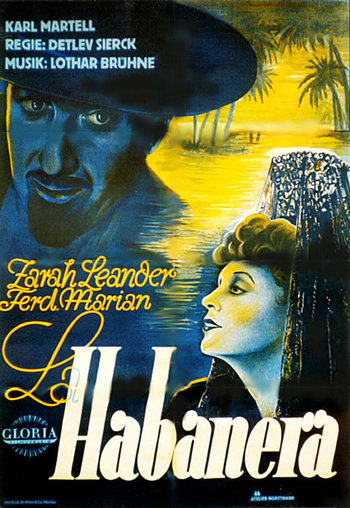 La Habanera is a film made in Nazi Germany in 1937, starring Zarah Leander and Ferdinand Marian. It was the last film directed in Germany by a talented young filmmaker named Detlef Sierck. Sierck, who was anti-Nazi and married to a Jewish actress, left Germany shortly after the film was completed. He eventually arrived in the United States, anglicized his name to Douglas Sirk, and enjoyed a very successful career as a Hollywood film director.

Two Swedes, young Astrée (Leander) and her aunt Anna, are visiting Puerto Rico on vacation. Astrée is taken by the beauty of the island and its exotic culture, and she is infatuated with their host, wealthy landowner Don Pedro de Avila (Marian). She boards the ship to go back to Europe but, enchanted by the music of a young Romani singer on the waterfront, she impulsively rushes off the boat and into the arms of Don Pedro.

Ten years pass. Astrée's marriage to Don Pedro has curdled into mutual resentment, with Don Pedro being manaically jealous and Astrée desperately missing her home in Sweden. Her only happiness is her nine-year-old son Juan. Meanwhile, the island has been hit with another outbreak of "Puerto Rico fever", an extremely deadly contagious disease. Don Pedro and the American authorities in Puerto Rico launch a cover-up denying the very existence of Puerto Rico fever, in an attempt to avoid damaging the island's tourism based economy. While this is going on two doctors, Dr. Sven Nagel and Dr. Gomez, arrive on the island in order to investigate Puerto Rico fever. Dr. Nagel just happens to be Swedish, and an old flame of Astrée.