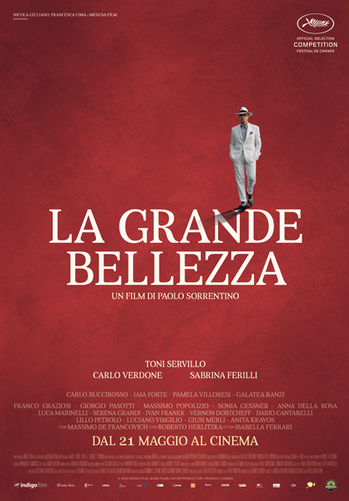 You can do a Drinking Game for every time they say that it shares similarities with La Dolce Vita...
"To this question, as kids, my friends always gave the same answer... "pussy". Whereas I answered... "the smell of old people's houses". The question was: "What do you like most, really, in life?" I was destined for sensibility. I was destined to become a writer. I was destined to become Jep Gambardella."
— Jep Gambardella
Advertisement:
"When I came to Rome at the age of 26, I fell pretty swiftly, almost without realising it, into what might be defined as the whirl of the high life. But I didn't just want to live the high life. I wanted to become its king. I didn't just want to go to parties. I wanted to have the power to make them a failure."
— Jep Gambardella

Jep Gambardella is a witty, wealthy socialite who after writing a modern classic in his youth has been dining out on it ever since in an endless succession of parties among Rome's artistic elite. However, after his 65th birthday party he's informed by a tearful widower that his first girlfriend, and the subject of his one and only book, has died. This triggers a slow but profound Heel Realisation from Jep that, despite best intentions, he's been wasting his talents and goes on a search for... something. Of course he immediately meets a woman, Ramona, with whose help he tries to overcome the emptiness of his life.

The second important character here is Romano played by Carlo Verdone, a famous Italian director. He is like Jep a provincial who came to Rome but never reached success comparable with Jep's. His plans usually fail and he cannot attract the girl whom he woos.

La Grande Bellezza is yet another outing for Production Posse Paulo Sorrentino and Toni Servillo in a particularly resplendent production. The film has received great acclaim from critics, and has been favourably compared to the work of Federico Fellini and indeed bears more than a passing similarity to La Dolce Vita. It might appear that there's no story as such, however in fact all scenes are tightly interwoven with each other and the film follows a fairly strict logic. Even though the plot threads can be properly followed only after several viewings.

Many characters who are presented in the chaotic manner follow their paths which can be discerned. The film has a number of brick jokes when the second scene with a certain character is a development of the theme established in the first scene. As a result each character has his own arc, all of which eventually come to a resolution of sorts.