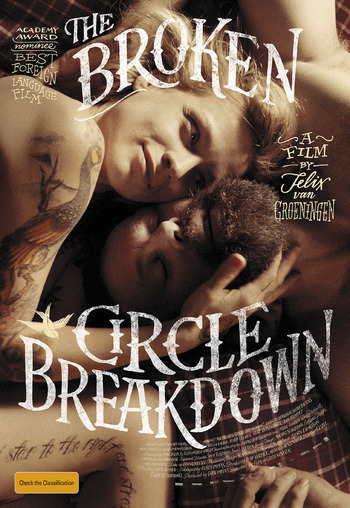 The Broken Circle Breakdown is a 2012 film from Belgium (in Flemish) directed by Felix van Groeningen.

The film opens with Didier and Elise, a married couple, in a cancer ward, at the bedside of their desperately ill 6-year-old daughter Maybelle. It then vaults back six years to trace the course of Didier and Elise's relationship. Didier lives on a rather ramshackle farm in Ghent, but his main passion is American Bluegrass music. In fact, he has a bluegrass band, a very good one which tours around the famous bluegrass hotbed of, um, Belgium, singing American songs like "Will the Circle Be Unbroken" and "Wayfaring Stranger".

Elise and Didier get married and she joins his band. They have a daughter that Didier names Maybelle after American country musician Maybelle Carter

. But Maybelle gets sick...