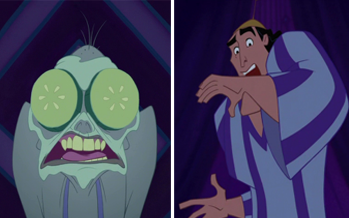 I scream, you scream, we all scream from face cream.
Advertisement:

Many women (and some men) put in a great deal of work and effort to constantly show their beautiful visages and bodies to the world.

Seeing the behind-the-scenes process of becoming so beautiful — for men — is a terror right up there with running into your average masked slasher killer.

The Cucumber Facial. Hair up in curlers. Girdles and corsets. Being Covered in Mud. Wrap treatments that turn one into a Bandage Mummy. Legs and/or armpits unshaven. Any man catching any woman in this pre-glamorous condition will be rooted to the spot, or run screaming. Occasionally, it is this horrifying for other women.

This also includes seeing women without their makeup and other glamour accoutrements: wigs, false eyelashes, etc.

Then there's the Truth in Television beauty rituals which can be really horrifying in a non-comedic manner and can be, but aren't as often, Played for Drama:

The one undergoing the beauty treatments is almost Always Female, though when a man is in such a state, it's Played for Laughs. The Double Standard says it is unmanly to want/need such treatments to look good. Though this hasn't always been the case, nor is it the case in every culture. In fact, in some cultures and at some times in history: the exact opposite was true. Very old works or works modeled on very old works may therefore feature men in this role.

Compare Women's Mysteries and Wondrous Ladies Room for other female-only tropes that confuse and bewilder primitive males. Related to Cosmetic Catastrophe, where the results of the beauty treatment are terrifying. See Uncanny Valley Makeup for when cosmetics are applied in what is meant to be a normal manner but comes out being scary anyway. See also Plastic Bitch.

While the Cucumber Facial is portrayed as scary to look at with the cream covering the face and vegetable matter over the eyes, facials are in the main quite harmless, and often beneficial when done properly. Done improperly, they can remove layers of skin.

The salon version of these treatments is usually more of a Women's Mysteries trope and usually part of a montage before She Cleans Up Nicely. The home version is almost always played for laughs, and more often than not goes horribly wrong — especially if hair dye is involved.

Lastly, although the trope is called Cosmetic Horror, it can and does include beauty treatments beyond the cosmetic (from corsets on outward) that induce horror when seen as part of the treatment, or just from what they do to the wearer.

Has nothing to do with Cosmic Horror... Hopefully. See also Weight Loss Horror for instances in which attempts to look better can backfire horribly.