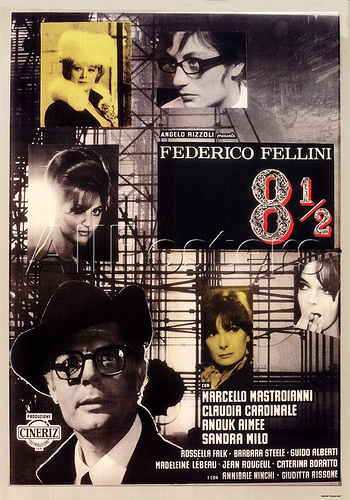 A pseudo-autobiographical 1963 film by Federico Fellini dealing with a director, Guido Anselmi (portrayed by Marcello Mastroianni), trying to make a film, but suffering from “director’s block.” To make things worse, his personal life is also going under a lot of stress: his health is not ideal, he doesn’t know where he is standing right now and he has problems with both his wife Luisa (Anouk Aimee) and his lover Carla (Sandra Milo). In other words, everything is conspiring to make his film sink like the Titanic.

One of Fellini’s better-known works, it’s a favorite of film directors for showing the trials and tribulations of their career. The movie is generally straightforward, but full of flashbacks and daydream sequences, practically without any warning (sometimes you don’t realize you’re watching a fantasy until later). The title comes from the fact that before making the film, Fellini realized that he had made six features and three shorts (each short being "half"), which added up to seven-and-a-half films. So, obviously, the next movie would be film number 8½.

Claudia Cardinale plays Claudia, Guido's "ideal woman" that he casts in the film.

Later remade as the stage musical Nine (Musical), which itself was later adapted into a movie starring Daniel Day-Lewis.

Compare/contrast with All That Jazz, Wild Strawberries and Celebrity.