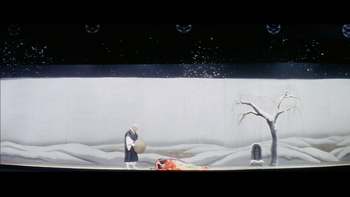 An Actor's Revenge is a 1963 film directed by Kon Ichikawa.

The film is set in 1830 in the city of Edo, which we now call Tokyo. A troupe of kabuki actors has arrived in the city and, at the start of the film, is giving a performance. The star of the troupe is one Yukitaro (Kazuo Hasegawa), an onnagata who plays the female roles, kabuki of the era not allowing women to perform onstage. Yukitaro is a crossdresser who presents as female even when he isn't performing, making himself up as a woman and speaking in a delicate high-pitched voice.

What no one other than Kikunojo the troupe leader knows is that Yukitaro is not at all the meek, gentle person he presents himself as. In fact, Yukitaro has a mission. Twenty years before, three men—Sansai the magistrate and merchants Kawaguchiya and Hiromiya—drove Yukitaro's father, another merchant, into bankruptcy and took over his business. Before that happened Hiromiya issued a Scarpia Ultimatum and got sex from Yukitaro's mother. The result was that first Yukitaro's mother and then his father killed themselves, leaving Yukitaro orphaned at the age of seven.

Yukitaro swore revenge. His mincing effiminate manner masks a badass swordsman who spent years training at a samurai school in order to have his revenge. Yukitaro identifies as the point of vulnerability Sansai's beautiful, romantically inclined daughter Namiji. He decides to seduce her in order to gain entrance to her father's inner circle and destroy the three men who destroyed his parents.

Observing all these shenanigans are Ohatsu, a stylish thief and pickpocket, her sidekick/flunky Muku, and Yamitaro, a dashing Robin Hood-style bandit (also played by Kazuo Hasegawa), who admires Yukitaro.