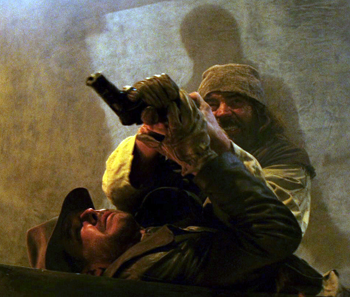 A very simple dramatic scene which involves two characters and a gun. Each one reaches for it and grabs it. They grapple, vying for control, until BANG! A few seconds pass and one of the characters falls down dead.

There is also a variation of this used for melee weapons, usually a knife.

If one party is mortally wounded, this may result in The Dying Walk. Compare Forced Friendly Fire.