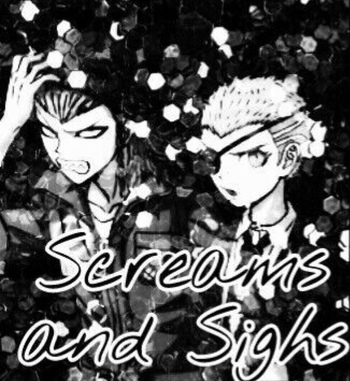 Warning: this fanfiction contains spoilers for Danganronpa 2: Goodbye Despair. As a result, spoilers for the game on this page will be unmarked.

is a Danganronpa 2: Goodbye Despair Slash Fic by Psychedelicate.

The fic takes place during the second game in the Danganronpa franchise, specifically after the second trial. It opens with Kazuichi seeing a new, vulnerable side of Fuyuhiko as a result of Peko’s death, and visiting him alone in the hospital in an attempt to further understand him. From there, the two of them gradually become close friends, and then lovers, over the course of the killing game.

The fanfiction was devised and written with alternate, intersecting character arcs for Fuyuhiko and Kazuichi in mind, and explores the trials and tribulations they undertake in their relationship. Thus, this is a character-driven story where romance does not take centre stage until the later chapters.

Tropes associated with Screams and Sighs: