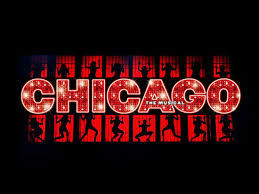 "Ladies and gentlemen, you are about to see a story of murder, greed, corruption, violence, exploitation, adultery, and treachery — all the things we hold near and dear to our hearts."
Advertisement:

Chicago, a musical originally choreographed, directed and co-written by the legendary Bob Fosse in 1975, is the story of Roxie Hart, a wannabe cabaret star in 1920s Chicago. She sleeps around unknown to her husband, Amos, but has a falling-out with one of her lovers, shoots him and is arrested for murder. In prison, she develops a rivalry with the star Velma Kelly, who killed her own husband and sister.

Roxie, through bribing the prison warden, Mama Morton, gets the best lawyer in town, Billy Flynn. Billy is a smooth-talking trickster who has never lost a case. As tensions mount and the media make Roxie a star, fame begins to get to Roxie's head. But the press will love her even more if she is found guilty...

A biting satire of celebrity trials, the press and show business in general, Chicago had an extremely successful Broadway revival in 1996 that is still running to this day. From there, it was made into a movie in 2002. The Broadway productions regularly star big names — the original boasted Chita Rivera as Velma and Jerry Orbach as Billy Flynn; the revival starred Bebe Neuwirth as Velma (earning her her second Tony after winning one for another Fosse production Sweet Charity) and Joel Grey as Amos, and since then has had tons of Stunt Casting.

Based on the 1924 nonmusical play Chicago by Maurine Dallas Watkins, which was in turn based on actual murder cases. It was adapted twice for the screen, first as a silent film in 1927, then in 1941 as Roxie Hart starring Ginger Rogers. Modern productions tend to go under the title Play Ball, the play's original subtitle, to avoid confusion with the musical.

This musical play contains examples of:

Other adaptations of the play provide examples of: