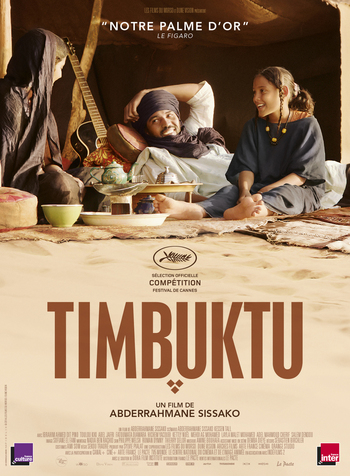 Timbuktu is a 2014 film from Mauritania, directed and co-written by Abderrahmane Sissako.

It is Inspired by… the Real Life takeover of Timbuktu—which, yes, is a real place, in the country of Mali—by the Ansar Dine jihadist group. The film opens with Ansar Dine having just laid claim to Timbuktu. Their fundamentalist regime, prohibiting everything from music to soccer, marks a stark contrast against the moderate lifestyle that the villagers have enjoyed. The local imam struggles to negotiate with the jihadis' leader to win some concessions from their occupiers.

Meanwhile, Kidare, a nomadic herdsman camped outside of Timbuktu, is not at first affected by these events. His more cautious wife Satima thinks that they should get out right away, but Kidare doesn't want to run, and they stay put. Ansar Dine's sharia law crackdown in the city gradually grows more and more brutal and violent, but life goes on more or less as normal for Kidare, Satima, their daughter Toya, and their adopted son Issan. That is, until a tragic occurrence that ironically isn't caused by the jihadists gets Kidare into terrible trouble.