Literature / The Other Side of Silence 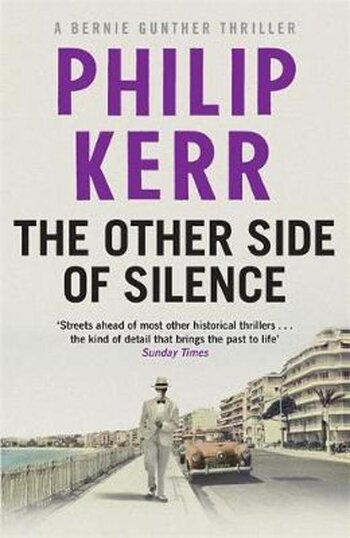 The Other Side of Silence is a 2016 novel by Philip Kerr.

It is the 11th novel in Kerr's series following the eventful career of detective Bernie Gunther. The story opens in 1956 with Bernie, unjustly accused of being a war criminal and wanted by law enforcement agencies all over the world, laying low as a concierge at a hotel at Saint-Jean-Cap-Ferrat, on the French Riviera. He whiles away his time by playing bridge, but as it happens, time is weighing too heavily on the world-weary private eye, who has gone through several lifetime's worth of pain and suffering. In fact, he just tried to kill himself, by means of car exhaust in a closed garage—but the car stalled.

Bernie the bridge player is brought to the attention of none other than W. Somerset Maugham, the famous writer, who also is skilled at bridge. It turns out, however, that Maugham didn't really summon Bernie to play cards. No, Maugham is being blackmailed. It turns out that Maugham is both gay and a former MI6 spy, and there is an embarrassing photo out there of Maugham at a naked pool party with several other homosexuals, including Guy Burgess and Donald Maclean—two British spies who turned traitor and have recently defected to the Soviet Union. The blackmailer is Harold Hennig, an ex-Nazi and once a captain in the SD. Bernie and Hennig have an unpleasant history that goes back many years.

As per tradition in a Bernie Gunther novel, things get progressively more complicated. Tangentially involved is one Anne French, an aspiring writer who hopes to write a biography of Maugham and asks Bernie for his help. Anne and Bernie fall in love.