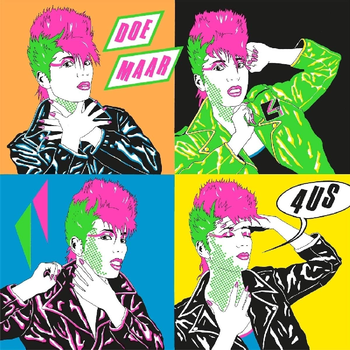 4US (pronounced as Virus in Dutch) is a 1983 album by Dutch band Doe Maar. It provided hits such as "Pa" and "1 Nacht Alleen", along with audience favorites such as "Doe Maar Net Alsof", "Nachtzuster" and "Alles Gaat Voorbij".

After their enormous popularity with a teenage audience the group tried to shake off this demographic and released this New Sound Album where they lyrically grew the beard and tackled Darker and Edgier topics such as adultery, heroin addiction, troubled father-son relationships, anxiety and fear about the state of the world, all more recognizable to people in their thirtysomething like them. This alienated some people, but it was still a huge bestseller and didn't give them the artistic credentials they wanted to achieve. As a result they disbanded the band almost a year later, at the height of their success.

With the passage of time their original intent has been rewarded and the album is now Vindicated by History. For that reason "4US" was subject of a documentary in the Classic Albums series, but this episode has only been broadcast on Dutch television and wasn't made available on DVD afterwards.