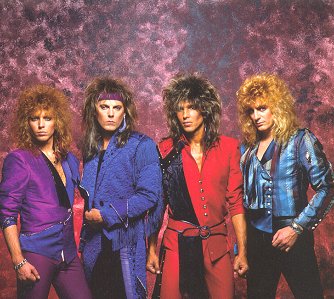 The classic line-up (L-R): Jeff Pilson, Don Dokken, George Lynch, Mick Brown
Dokken is a Heavy Metal band from Los Angeles formed in 1978. The band's name comes from the lead singer's surname, though this happened because their original name "Airborn" was already taken by another band that happened to have a record deal. They were primarily successful from 1983-87 for their albums Breaking the Chains, Tooth and Nail, Under Lock and Key and Back for the Attack. Some of their more popular songs include "Breaking the Chains," "Into the Fire," "Just Got Lucky," "In My Dreams," "The Hunter," "It's Not Love," "Burning Like a Flame," "Dream Warriors" and "Alone Again".
Related Acts:

"Mr. Scary" appears on Brütal Legend, former bass-player Jeff Pilson (1983-2001) has lead a mildly successful acting career note He played Steel Dragon's bassist in Rock Star and voices Johnny Cage in Mortal Kombat 9, and the band provides the name of one of Vice's unique/command-special attacks in The King of Fighters.