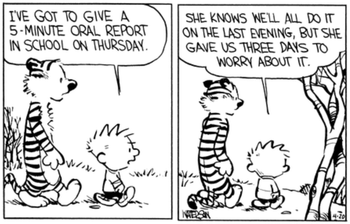 Calvin: You can't just turn on creativity like a faucet. You have to be in the right mood.
Hobbes: What mood is that?
Calvin: Last-minute panic.
— Calvin and Hobbes
Advertisement:

Procrastination is the putting off of an unpleasant task until the last minute. It's quite common. Hell, if you are reading this, you probably are procrastinating right now. The Ridiculous Procrastinator is someone—often someone very capable—who does this to such ridiculous extremes that it is almost funny. He will put off writing a 10,000-word paper until the night before it is due, and once he sits down to start it, he will find half a million petty tasks that do not need to be done to avoid writing that paper. Often, he will find that the assignment practically writes itself once he gets going.

Some common tactics of the Ridiculous Procrastinator include sharpening pencils, constantly checking email, cleaning, feeding the pets, talking on the phone (bonus points if they talk about the task), reading TV Tropes (bonus bonus points if they're reading this page) and basically anything that they can do to avoid doing what they have to do.

When they finally begin working (usually when they realize they only have about an hour left to finish), they begin working like The Flash after drinking 12 pots of coffee. In some cases, they finish their project at the last minute, run like madmen to their class (or workplace, or what have you), only to find out that the deadline's been changed, or the project's been canceled, meaning they've done all that work for nothing.

Most procrastinators are aware they have a problem and intend to correct their Fatal Flaw. They'll get right on it tomorrow.

There are a ton more examples beyond those listed below, including:

... bah, we'll add them later, we got time, you wanna shoot some hoops or get something to eat?